With 2020 already standing out for the many changes forced by the COVID-19 pandemic, one lasting change expected will be how and where workers do their jobs and how the changing views on office space impact commercial real estate.

When the coronavirus started to make its mark on the U.S. in early March, many businesses were forced to close. And employers that could continue operating carried on by telling their workers to stay home to do the job. This was done as a way to reduce the spread of the virus, but it’s had a bigger impact on overall work culture.

In many cases, productivity among remote workers wasn’t affected or was improved, some employers reported. Many workers embraced the change, saying they preferred working from home because of the flexibility it offered their lifestyle. And businesses began seeing the possibility of reducing the overhead of leased and owned office space.

The trend could lead to problems for owners of commercial real estate as office space demand takes a sharp downward turn, according to industry veteran Paul Daneshrad. Some estimates suggest that as much as 145 million square feet of office space will be lost through next year as a result of the growing popularity of remote work and a reduction in workforce brought on by COVID-19’s economic toll on the economy. That nation already has lost more than 1 million jobs from the economic hardships caused by the pandemic. 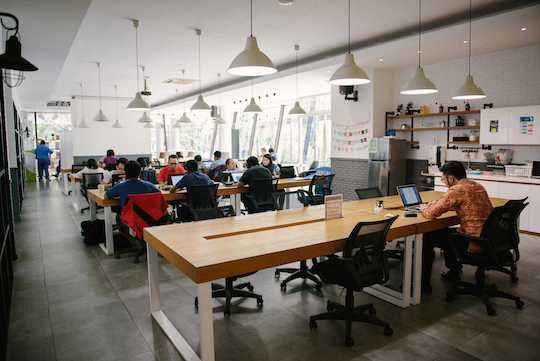 While the nation’s 6.7 percent unemployment rate in November showed a slight improvement and was down from the peak of 14.7% reported earlier in the pandemic, the jobless rate remains nearly double what was reported before COVID-19, according to Yahoo Finance. And other employment trends going into the new year suggest continued problems, with private-sector hiring falling in November to its lowest level in four months and new weekly jobless claims continuing to increase.

The impact of COVID-19 has forced employers to rethink how they conduct business. In some cases, companies might also be considering the possibility of reducing expenses by allowing employees to continue working from home and shedding the traditional capital expense of office space. Some companies like Gannett, one of the nation’s largest news organizations, already are putting office buildings on the market as they look for ways to cut costs and put off bringing employees back to the office. In some sectors, workers may never return to a traditional office again.

One change likely for those companies planning the eventual return of workers to the office will be an expanded workspace, according to Daneshrad. Employers will want to ensure workers have enough space to spread out.

Despite the fact that vaccines are rolling out and the COVID-19 infections, hospitalizations, and deaths are expected to decline in 2021, businesses committed to returning employees to the office will want more space. They will create a more open work environment that allows employees to distance themselves from each other. And that new office trend could help fill come of the void created by the pandemic in the commercial real estate market, Daneshrad said.